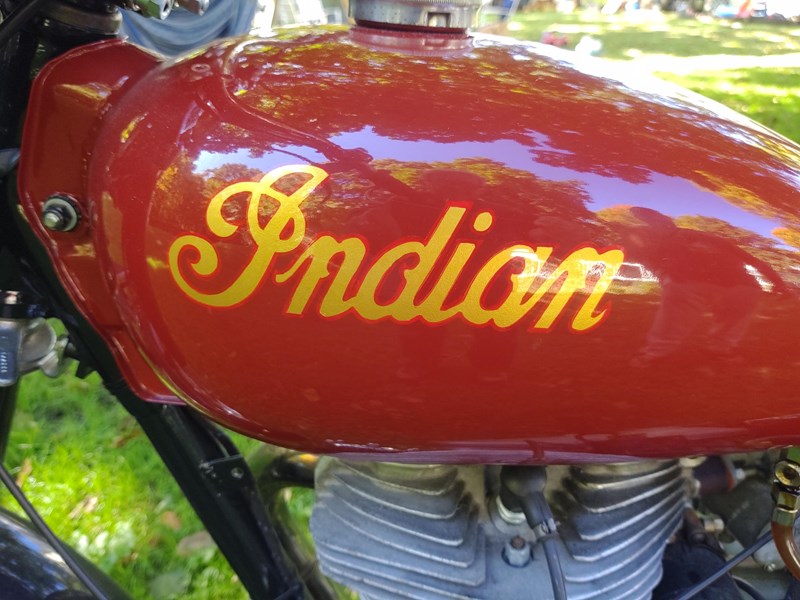 I have a complete frame off restored 1955 Indian Woodsman for sale. This bike was purchased by the current owner in October 2012 from a dealer in Iowa. The bike arrived missing most of the engine and transmission internals and it was quickly determined a full frame off restoration was warranted. A local motorcycle restorer agreed to undertake the task and the owner and he rebuilt the motorcycle for the next eighteen months. The bike was titled and registered in 2014. All replacement parts were sourced from Hitchcock Motorcycles in the UK, the leading supplier of British manufactured Royal Enfield parts. All Hitchcock Motorcycles invoices, totaling more than $9,000USD, will accompany the sale to document the sourcing of NOS and replacement parts along with original Repair and Overhaul Manual and Parts List, vintage advertisements and old and extra spart parts.

The restoration is concourse quality and has most recently been on loan to a local Indian dealership in Central MA for their showroom. The bike will be sold with a MA Title and was registered for on road use prior to being shown.

The Springield MA Indian manufacturing ceased operations in ceased operations and discontinued production of all models in 1953. In 1955, Brockhouse Engineering purchased the rights to the Indian Motorcycle name and sold imported Royal Enfield models branded as Indian Motorcycle models until 1960. This motorcycle is part of the storied tradition of those branded Indian motorcycles.