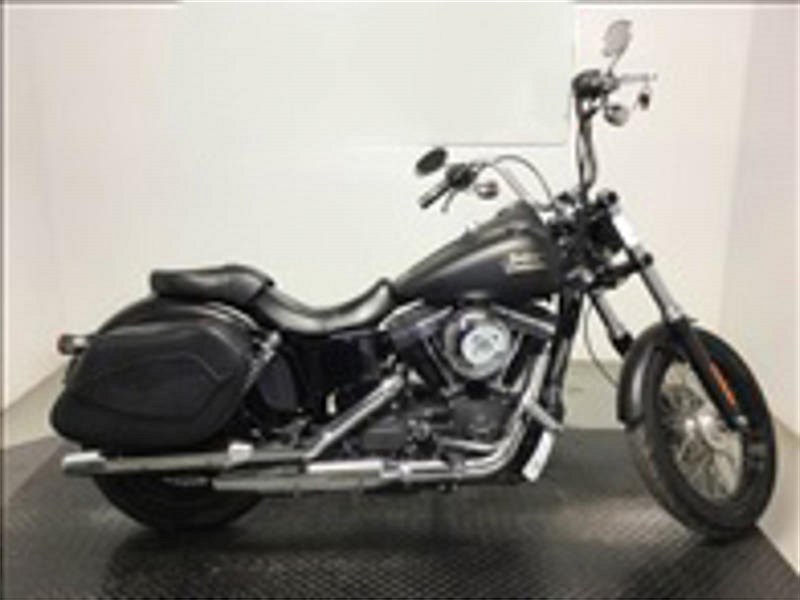 The time-honored art of getting rid of everything that doesn’t matter.

The original bobber fanatics invented the style you see here, and they had one rule: if it weighs you down, get rid of it. That’s the Street Bob® motorcycle in spades. Solo seat. Chopped rear fender. Mini-apes putting your fists in the wind. No B.S. All it takes is a twist of the wrist to send whatever the world is trying to weigh you down with to the vanishing point behind you.

There is something about the steady pulse of power from an air-cooled Twin Cam 103™ engine that works its way into a rider and won’t let go. Once you’ve experienced it you understand. Nothing else in the world of motorized transportation could be as satisfying. There are perfectly rational explanations for this. The lightweight piston design and refined delivery of power. The strong driveline and bulletproof internal parts. The way engine and Six-Speed Cruise Drive transmission work flawlessly together to carry you down the highway at a relaxed, easy-riding rpm. But rational explanations never go far enough. What you feel when the power of this engine pulls you down the road toward the vanishing point is the legacy of the Flathead, Knucklehead, Panhead, Shovelhead, Evolution, Twin Cam 88 and Twin Cam 96 engines that came before. It’s something no ordinary engine can deliver.

You don’t see a lot of 21 century technology peeking through the clean old-school lines of the motorcycles in the Dyna family. That’s the point. Once the teams of engineers and industrial designers have finished building the systems that load these motorcycles up with modern function, the job is only half finished. The next step is to find smart ways to integrate it into the design without taking away from the styling cues. Take the anti-lock brakes that are either standard or available as a factory-installed option across the line. It’s one of the top ABS systems out there, and gives you the control you want in a modern motorcycle. But the real beauty is the way we streamlined the look of the hardware.

If there’s anything the unruly bunch of riders that gravitate to a Dyna® motorcycle have in common, it’s that they’re not easily satisfied. So we built every bike in the family to bridge the gap between knockout looks and uncompromising open road function. The exceptional stiffness of the chassis makes for sure-footed handling. The brakes and suspension components are top end, and the custom-style wheels roll on premium rubber designed for both durability and grip performance. A Dyna motorcycle is rolling proof that you don’t need a bike that looks like it belongs in a B-grade science fiction movie to burn through a wicked set of curves.

Journey back far enough in the factory custom history of the Dyna family and you get to the machine that started the whole thing off: a Harley-Davidson touring bike. Seriously, and that’s your first clue to the rider comfort that waits for you in the saddle of today’s Dyna motorcycle. That early touring machine featured a new kind of isolation mounting system for the engine. Which led to a series of innovative frame designs. And that brings us to the current Dyna frame and its two-point engine isolation mounting system. It makes sure the power of 103 cubic inches of Twin Cam 103™ engine gets to the pavement. But the vibrations don’t get to the rider.