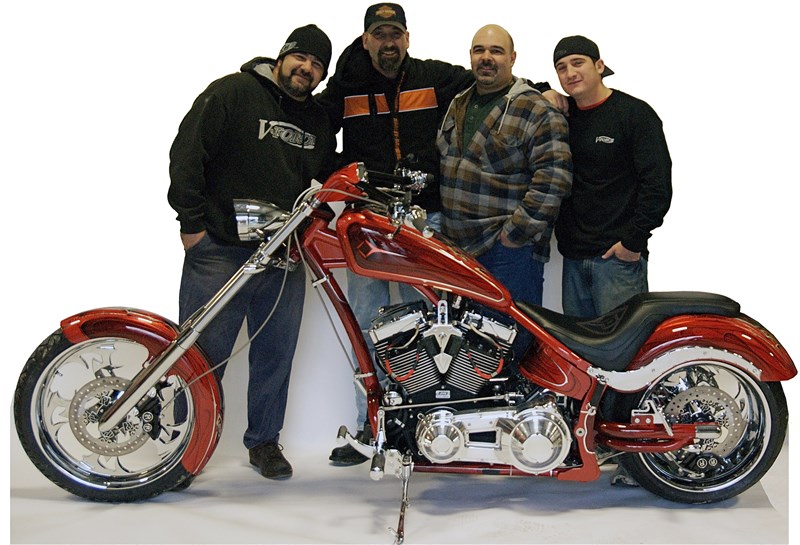 Custom Chopper Built by V Force Customs Vinnie Dimartino and Cody Connley from Orange County Choppers bike was built in late 09 delivered in Jan 2010 at unveiling in Michigan. Vinnie and Cody two of the most likeable cast members for a short time before Sr Vs Jr series aired built 4 customs under Vinnie's Company V Force Customs , the bike was built and used as a Cancer awareness bike and was toured for three years raising money for the cancer community. This bike was built to my specs to include the JIMS 131 engine and Baker trans, RSD unit torque box and King kong clutch also S&S Electronic engine module, electrical wiring and use of HD forwards .
The bike had all body , paint, and grafix's done by Justin Barnes "JB Grafix's Marboro NY Justin painted many of the first OCC bikes the Fire bike in tribute to 9/11 was done by Justin . This bike has 45 days of documented work done by Justin several applied coats of paints, gold , and silver leafing the pictures speak for his high end quality .
The bike also was the true first bike built by not only the these two cast members but OCC to be street legal it would lead several cancer charity runs making it not only a good looking bike but a dependable and fast bike , as many know Vinnie was the one person who knew how to do things right on this long running TV series his work is second to none.
Tons of photos of the unveiling, with both cast members, the 55 events the bike was asked to be present at, and tons of build pictures and vid's from the unveiling to Daytona to two other events were both Vinnie and Cody attended.

The bike has been stored in climate controlled storage proper steps for storage makes this bike not only a show bike but a turn key bike that can and has seen road miles 2100 to be exact.

This also was the last bike out of Orange county NY to use a Rolling Thunder custom frame..