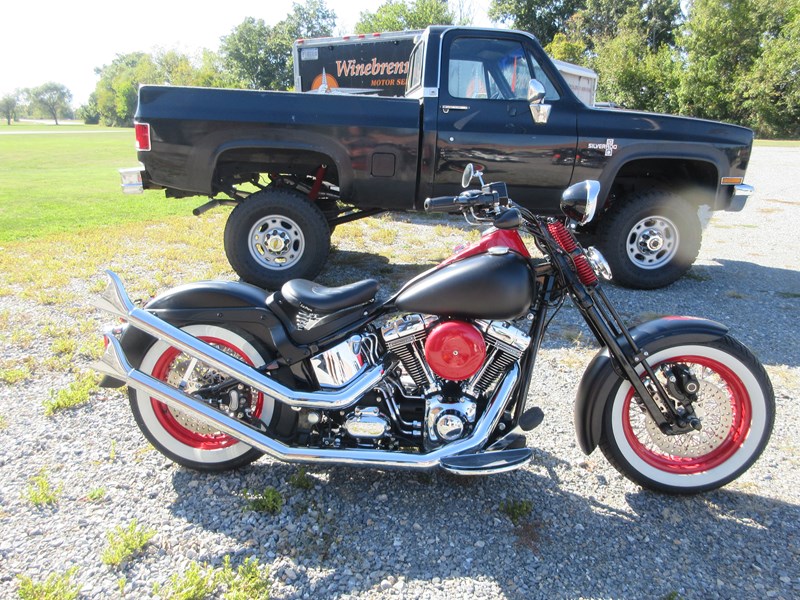 This NASCAR Commemorative custom-built in 2009 (by Thunder Mt. Cycles) Motorcycle has many amenities; among them is a Fuel-injected 110 cubic inch Harley-Davidson "Screamin' Eagle" Engine and a Harley-Davidson Soft Tail frame. The front Springer fork is custom manufactured and is hydraulic as well; built like a tank, but sleek like a Ferrari. Included in the goodies is an unopened signed painting unique to the Commemoration of this bike. Done by a legendary artist: Sam Bass! This is a beautiful machine all the way around, no doubt about it!

Limited to 60 units, these Bikes were the creative idea of Bruce Rossmeyer of Daytona Florida. This is #. Shipping is the primary responsibility of the buyer, but we can assist. This item is for sale locally, so we reserve the right to end this listing for that reason.

A portion of the Press release from 2008:

Rossmeyer and NASCAR have also partnered with renowned NASCAR artist Sam Bass, who will be creating a unique painting that will be included in the purchase price of each of the Officially Licensed NASCAR 60th Anniversary Motorcycle brought to you by Destination Daytona. Each motorcycle will be sold for $48,600.

Each motorcycle in the series will be created by Thunder Mountain Custom Cycles and distributed by Bruce Rossmeyer's Daytona Harley-Davidson.

The officially licensed NASCAR 60th Anniversary Motorcycle Series brought to you by Destination Daytona was unveiled the week leading up to the Sprint All-Star Race in Charlotte, North Carolina on May 17th 2008.