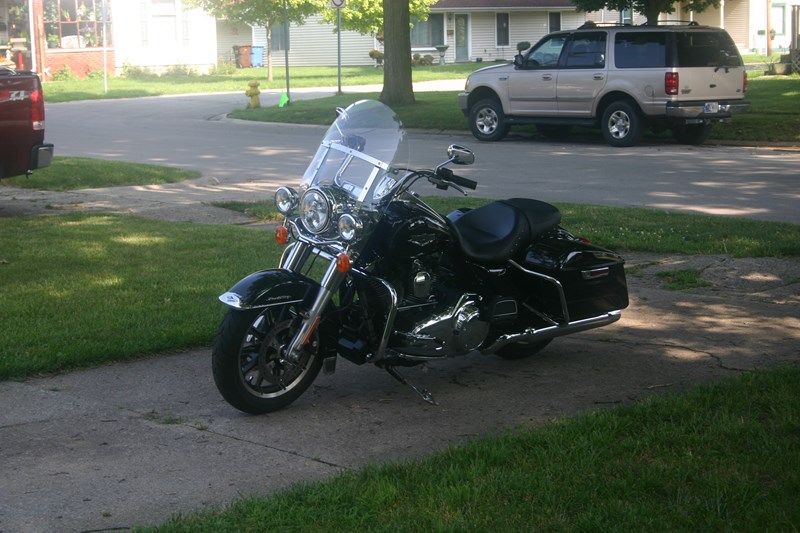 I know it is self serving when I say there is nothing wrong with the bike however, there isn't anything wrong. I was injured at work and am no longer able to ride. It is a sad situation, but life is full of those. I could keep the bike until the rubber fell off the wheels, but the gods demand she be taken out and rode. I have enjoyed every last mile I was able to put on her engine. It took me to Nashville, Knoxville, Asheville, Johnson City, Hazard, Lexington, Cincinnati, Indianapolis Lafayette, Champagne, Chicago, Toledo, Detroit Columbus, Akron, Canton, Fostoria and points in-between. Michigan, Illinois, Indiana, Ohio, Virginia, Kentucky, and Tennessee. I had plans to go north to Canada and circle Lake Superior and see North America, but it never happened. If you are looking for a decent bike that is willing and able to go the extra mile, look no further. <--- that was the selfish plug we all expect. But, honestly, this Harley is a real champ. I have had honest pleasure riding her, and I think the right buyer will as well. The few modifications I have made has helped me, as a shorter rider (5"6"), better control her and master the road I am on. The rubber is good and has been maintained in storage to prevent dry rot. In storage the bike has had a battery tender on to maintain the battery. The fuel has had additive for stabilization and to prevent moisture. Tire pressure has been maintained and air suspension has been kept at an intermediate pressure of 35 lbs (55 max). The air shocks mentioned below had 3 miles on them when the bike was lowered. Despite the milage the oil was changed with Syn3 Harley branded oil and a new filter was replaced at each change. I have always used a mid-grade fuel when available or premium. Hand washed and waxed for the motorcycle parties I'd been invited to and always a compliment when I would show up(yes, I am bragging). Enough! If you are seriously interested in a used but in good and in-shape touring style motorcycle, look no further. The milage on this bike is low and true, but the price is lower than higher milage bikes, and is highly competitive. Please, see below...

Low mileage (7914 mi.) Harley Davidson Road King. I had the bike lowered one inch at the back and purchased a 16" windscreen. Both the original shocks and windscreen are included with purchase. There is a Harley Davidson stylized “V” in chrome that hangs below the rear fender. The passing lamps were replaced with yellow bulbs and I will include the originals should you wish to change back to white. Beyond that it is a stock bike and rides well. It will go the distance in the heat of the summer. It has the 103A engine with coolant cooled valve seats and performs flawlessly on long rides, even when the temps are in the mid 90’s. I have never had a problem with the air suspension; it holds true at 35 lbs all season long. Also included are the battery tender as well as other miscellaneous tools for servicing.

Included in the purchase price is a Harley Davidson King Tour Pack that was purchased from the factory with the bike in 2014 and is factory color matched with pin-striping (Vivid Black). The Tour Pack comes with the mounting hardware and back rest. The original purchase price for these items was over $2000 (tour pack w/ factory paint matching and pin-striping was $1778 and back rest was $230). This tour pack is beneficial to any passenger you might wish to have. My wife has enjoyed this feature for the comfort and also for the storage of the various items she wishes to bring.

In short, you have mechanically like new bike with sensible upgrades for sale at a price that is less than equivalent bikes with far fewer miles. Dollar for dollar, you won't find a better deal. If you are in the market for a touring bike with the long range comfort you and your passenger expect, this bike deserves prime consideration. If you honestly do no believe this is the right match, I totally understand. I have been as accurate as I could be in the description and am confidant that you will get the pleasure I expected out of her.